Behind the game – History and design considerations

In Clouds of Glory has a long design history behind it. Sometime in the beginning of the nineties Thomas Greve made a simple set of rules for dogfighting as a part of a ”pen and paper” roleplaying game campaign. Later Svend Larsen aka Gimle came across the design process and the game matured thru many long game nights.

We started getting an interest for the early air war and worked our way through the books we could get our hands on.

The planes were made out of balsa wood and cardboard wings and the stands out of piano wire.

Soon we were 4 regular players playing a prolonged campaign and other campaigns followed until the late nineties. Then we forgot the game, moved to Copenhagen and got on with our lives.  At some random fluke we met up again in 2006 played the old game once – And as much had happened since; Svend had been working for 10 years as a professional designer of corporate training simulations- and games and Thomas works as a movie art director and has acquired a private pilots license, we decided to redesign the game.

The game in its current form has been rather carefully designed and tested in order to meet a balance between playability and at the same time have a representational depth . This is off course always a matter of personal taste but we have aimed for a balance that we personally like. We hope you agree. In the design we have focused on the following aspects:

The illustration here shows some of the data behind one of the Airplanes in game. The data is collected and generated for all airplanes in this game, and used to build the mechanisms behind the Cockpit panels.

The goal has not been a hardcore simulation game, but a game where the real life difference between the Airplane types shines thru and has a lot of details. An example could be the climbing ability of the airplanes which is boosted in this game with a factor 3. Since the game works in 5 second turns, So the real life performance and difference between the Airplane would never had been noticeable by the players.

Airplane flight modelling – Great care has been taken to systematically map the different planes based on the available data such as engine performance, wing area and load factor, drag, construction methods, weight, and many more. In order to get realistic performance data for stuff like roll rates, durability, climb and dive rates, corner speed, safe manoeuvring speed and so forth, only resorting to anecdotal evidence when other sources were absent.

Scale representation. In Clouds of Glory uses 1/350th scale models. The moving scale is 1/720 – So a airplane flying 100 Km/h will move 20 centimeters in one game round (10 move units).  In all the other games we have seen the off-set between model scale and moving scale is much bigger giving the impression that the aircraft can turn on a dime and only shoot at very short range.  Wings of War for an instance has a model scale of 1/144 and a ground scale of at least 1/1400 (based on turn radius). In games using 1/72 scale aircraft this off-set becomes even bigger. We think that the picture created by having a closer relation between model and ground scale makes for a great looking game.

Attitude modelling. The model planes in ICOG uses a unique 360 degree nose mount. That makes it possible to position an aircraft in any position. The game makes use of this as the actual poise of a given airplane is used for both movement and shooting purposes – A airplane rolled to an inverted attitude is at an advantage if it wants to make a swooping dive onto a target below, but at an disadvantage in relation to targets above as the plane would need to use both movement straight ahead and energy in order to make a roll to normal flying position before being able to zoom up to the targets above.

Altitude representation – Many air war games have a hard time representing altitude – They use altitude markers, altitude pegs or sometimes car antennae in order to represent altitude in some abstract manner. This gives an mechanically functional system, but it does not provide a “true” 3D representation of the vertical distances between the planes. The very high flight stands in this game, combined with the small model scale gives this representation depth and believability. We have however omitted how engine performance dropped off at altitude.  Instead we have chosen a compromise altitude band of 6.000 feet.

Energy management -  A very central aspect of the game is the energy management system – Simply put: Almost everything you do with your airplane alters its energy state. All of this is represented in a relatively simple system where altitude alteration and turns all add up and convert into steps that the speed indicator is moved. 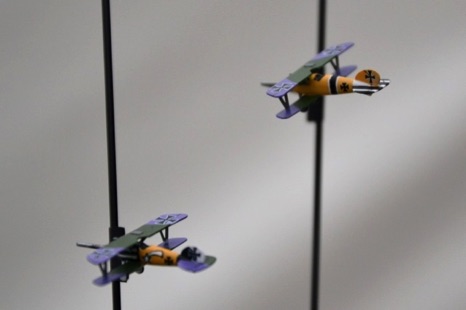 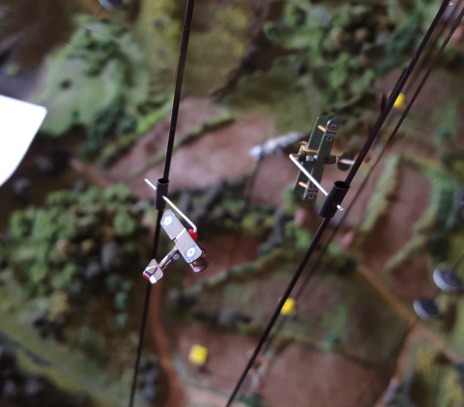 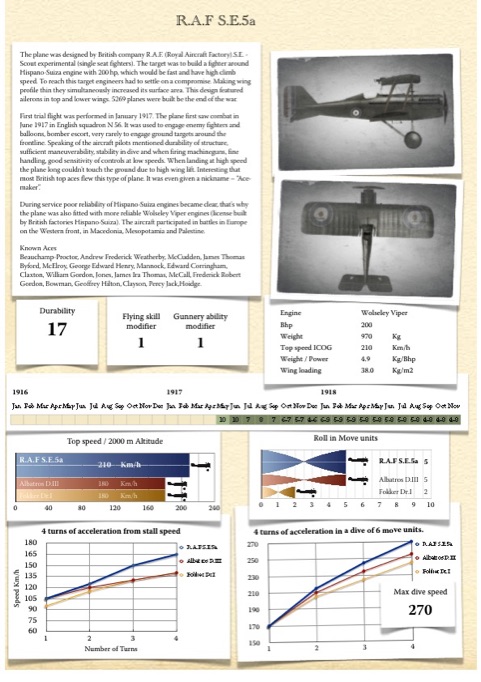 IN CLOUDS OF GLORY